The statistical data available both globally and in India are evidence of the fact that Breast Cancer is a rising concern. Goa in particular has been witnessing a rise in breast cancer cases in the recent years. Goan lifestyle and food habits have given rise to many health concerns which have come to light in the last few years (local newspaper articles cover a lot of statistical data which reflect the rise in many diseases such as heart disease, diabetes and the most recent being breast cancer). Over 95% of cancers can be detected in the initial stages which in turn allows for better treatment options. With early detection and appropriate treatment, the morbidity and mortality from the disease can be reduced to a very large extent. Local NGOs have also been actively involved in raising cancer (including breast cancer) awareness. The web is flooded with statistics suggesting a rise in breast cancer cases in the country. Today, medical help and screening is easily accessible at major hospitals. However, the lack of will to take action is the only barrier that stands between death and a chance to survive.

Goan society being very conservative, this is not a topic that was discussed openly in the past. For the past 8 years, ULHAS has being running this campaign to generate awareness and remove the conversational barriers associated with the topic. We are happy to see changes in the response to our campaigns.
The purpose behind this initiative was to be able to break down barriers and encourage more people to stay aware and take action.

The October – November Period which is our peak festive season, attracts a higher than normal footfall to our showrooms. We felt it was the best time to drive this message as it would reach a larger audience and hence the campaign “LIFE IS PRECIOUS” takes precedence every year in the month of October which is also observed as breast cancer month globally. So it was most appropriate to be highlighting this health problem during this month. The Life is Precious campaign for Breast cancer awareness is an annual activity. As part of our commitment towards driving this initiative, the entire Month of October has been dedicated towards raising awareness on Breast cancer and the importance of regular examination.

ULHAS wanted to go beyond the PINK cliché. Instead of passive PINK ribbons and balloons, we focused on knowledge and preventive action. We prepared literature and awareness posters that would prompt people to stop and think. This helped us raise awareness through on-ground activity as well as online campaigns.

Our campaign is focused on Awareness and urging people to stay aware and switch to a healthy lifestyle as the first step towards fighting Breast Cancer. In the past, ULHAS Jewellers has associated with Medical entities to provide Free Examination including private consultation, complete health checkup, tests and scans for women and access to Discounted Cancer detection packages to detect abnormalities.

Breast Cancer is now a Global Conversation and ULHAS Jewellers is taking every step to ensure that this conversation leads to a conscious awakening amongst its customers a major percentage being women. If our efforts can help change mindsets and get people to take conscious steps towards adopting a healthy lifestyle, we believe we have already won half the battle. 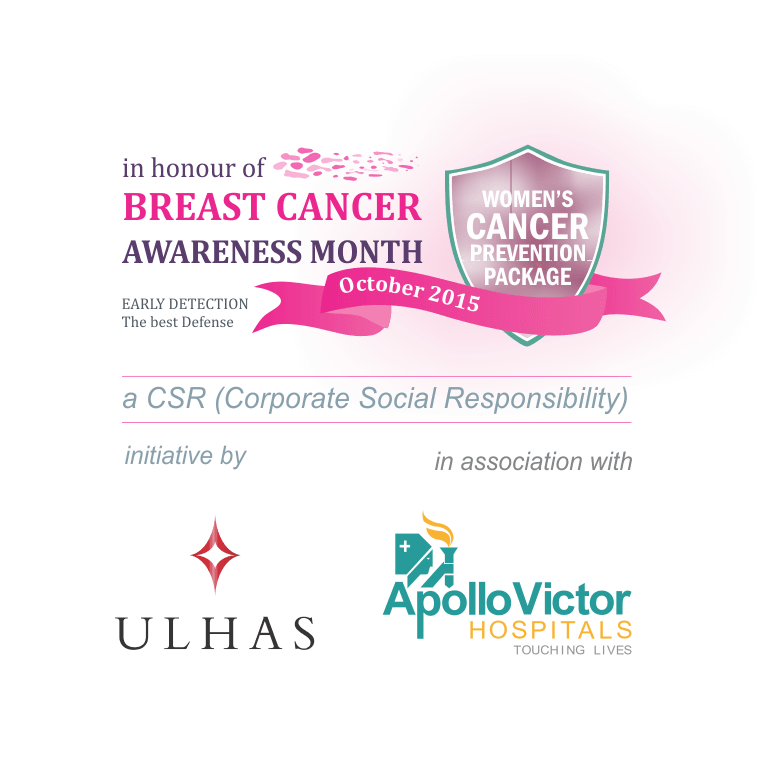 As a part of our commitment towards raising Breast Cancer Awareness, ULHAS Jewellers associated with Apollo VICTOR HOSPITALS to offer patrons Free Examinations and comprehensive Cancer detection packages for Women which were aimed at providing access to  private consultation, complete health checkup, tests and scans via the hospital’s medical facilities.

ULHAS associated with Goa River Marathon to help gather support for the “GOA Pink Run” in 2013 organized by Vasco Sports Club in association with MUSKAAN – an NGO supporting Cancer Survivors to encourage people across Goa to come together to support the cause.